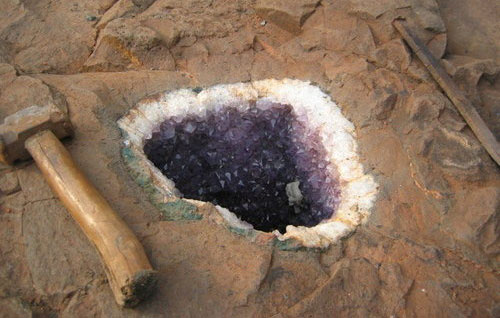 We thought we’d start our gem spotlight series with one of the most beautiful and accessible gemstones of them all: amethyst. Amethyst is the lovely purple, violet or mauve gemstone you see adorning all different types of jewellery, from pendants to earrings to rings. Amethyst is a type of crystalline quartz, a mineral that can be found around the world in rocks and boulders, filling cracks and fissures, or in pebbles, sand and gravel.

Amethyst is a striking stone; seductive in colour and considered by many to be the most sought-after of all the quartzes. Its name comes from the Ancient Greek word for ‘not drunken’, and the ancient Greeks wore amethyst, and adorned their cups with it, in the belief it would prevent intoxication.

Amethyst’s lure didn’t start or end with the ancient Greeks. Many cultures throughout history have coveted amethyst and the stone has even been found with the remains of Late Neolithic man. The ancient Egyptians believed amethyst could protect against guilt, fear and poisoning. Moses described it as a symbol of the Spirit of God. In medieval times, amethyst was put under pillows to cure insomnia and promote pleasant dreams, while soldiers wore amethyst amulets to give them calmness of mind during battle. Among many things, amethyst has been said to enhance courage and creativity, to promote intuition and self-esteem, to deflect anger, and protect the wearer against evil.

Representing ‘the royalty of Christ’, amethyst has a long association with the Roman Catholic church. First mentioned in the bishop’s insignia in the early seventh century, a typically gold and amethyst ring became a symbol of Episcopal authority. Some bishops still wear amethyst rings today.

Since purple is considered not only a cardinal but also a royal color, amethyst is an insignia of power and at times throughout history was valued more than diamonds. The stone is featured in the British Crown Jewels, British King George III (1760-1820) is said to have purchased a necklace of amethysts “at a very high price” for his wife Queen Charlotte, and Catherine the Great of Russia (1729-1796) was so fond of the gem that she sent thousands of workers in search of it in the Ural Mountains.

Though Amethyst can be found all over the world, prominent sources are Brazil, Uraguay, Russia, Austria, India, Zambia, Madagascar, South Korea, USA and Canada. Amethyst scores 7 on the Mohs scale of mineral hardness (a diamond would score 10) and owes its violet/purple color to iron impurities. Without such coloring agents, amethyst would simply be transparent, ordinary colorless quartz. Amethyst can be heat treated to produce a colour change to green or yellow.

Amethyst is the birthstone for February, the gemstone for Pisces and the gemstone for the 6th anniversary of marriage. Once considered equal in value to diamonds, ruby, emerald and sapphire, great finds in South America and elsewhere made amethyst more plentiful. As the stone’s rarity decreased, so did its price, meaning that despite all its noble traditions and unquestionable beauty, amethyst is now a surprisingly affordable gem. It’s also one of our personal favourites.

Why Buy From Us?